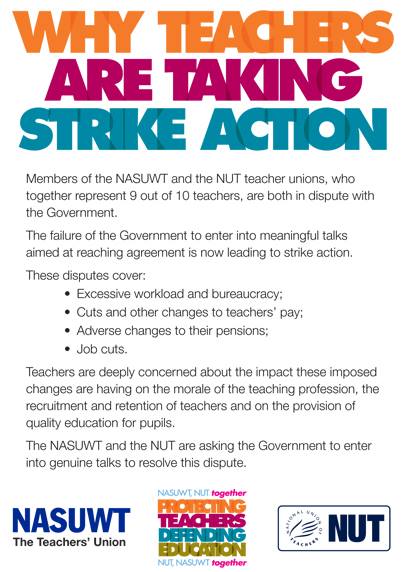 NASUWT and NUT members in the North-West of England escalate their industrial action from action short of strike to strike action. Teachers from the two largest teaching unions – which have put aside historical differences to campaign on a common front, in solidarity, against the education policies of the UK Government, a coalition of the otherwise unelectable Conservative and Liberal Democrat parties, which aim to privatise and otherwise dismantle the UK’s famous universal free state education system.
This region, also badly hit by the Coalition’s other Austerity-driven socially divisive policies, sees the launch of a campaign of such escalated action on 27 June 2013CE.

Messages of support: campaigns@mail.nasuwt.org.uk
Twitter: #June27 #strike #solidarity #teacherstogether
Use the hashtags – be great to get the action trending!

Click the image for further details of the action.