The ‘Report into allegations concerning Birmingham schools arising from the ‘Trojan Horse’ letter’ authored by Peter Clarke CVO OBE QPM was published today, Tuesday 22 July 2014, and can be found here.

Also published today on this theme:

I am grateful to The Guardian for their live online coverage of the Statement by Nicky Morgan on the Trojan Horse Letter debated in the House of Commons today, Tuesday 22 July 2014. The Telegraph and The Sunday Times, neither of which would sit on gogwit’s coffee table, should also be mentioned for running this story when it was being written off as right wing, Islamophobic, racist fiction.

I have used the local press as a source of many stories offered today on Gogwit’s Blog, I make no apology for this.
Local parliamentarians have spoken out on the “Trojan Horse” issue today Birmingham Hodge Hill (Birmingham schools ‘feel like the Balkans’ – The Guardian, 22/07/14) and yesterday Birmingham Perry Barr (Stop pretending Trojan Horse plot is fake, urges Birmingham MP – Birmingham Mail, 21/07/14).

The output from three news sources on one sunny July day. The content requires no further comment from gogwit at this time.

Other local news: Today many students are graduating from local universities and many local school children have begun their summer break. I wish them all the very best.

Our dear friend and cousin, Jan, former City Councillor for Oscott Ward, passed away on 26th February after a short illness. Outgoing and popular, she is sorely missed by her family and many friends, her colleagues in the Trades Union and Labour movements and by her fellow school teachers and former pupils. Jan’s funeral is on 17th April 2013, 2pm at Sutton Coldfield Crematorium, Tamworth Road, returning to Copenhagen Mews, Cofield Road, Boldmere. Flowers or donations to Queen Elizabeth Hospital Charity c/o A. Hazel & Sons, 43 Birmingham Road, Sutton Coldfield, B72 1QF. Tel: 0121 354 2145.

The above is the official notice, an excellent summary – the work of my mother.  It is the basis of the obituary in the Birmingham Post on 5 and 10 April.

Jan was certainly outgoing and vivacious and it is unsurprising that, having moved in many circles, there will be many unique memories of her; all differing in the detail but all recognisably Jan.  This was brought home to me, strongly, when I ‘googled’ her name.  Among the ‘hits’ was a link to a ‘My Favourite Teacher’ comment on the Friends’ Reunited website.  I reproduce this (anonymous) text without permission:

Mrs Bott-Obi was one of the most inspirational, dynamic teachers I have ever met. She made you believe anything was possible. Her consideration for every pupil was incredible.
Her sense of humour, ‘unique’ sense of dress and super teacher style will remain with me forever.
Thank you Mrs Bott-obi. When you left in 1972 to pursue a political career, I cried many tears…. what a loss to teaching!

This refers to Jan’s career as a teacher at St Margaret Clitherow RC – one of the schools which merged to become St Edmund Campion school in Erdington.  I’m sure that those who knew Jan will recognise her personality shining out from this ringing endorsement.

The author noted that Jan left teaching.  Jan possessed the strong activist streak which runs through our family and became involved in the Labour Party and in working at the West Midlands divisional office of NUPE, latterly UNISON.  Jan was a natural politician, with a ready smile, an infectious laugh, a genuine interest in the issues vexing electors and, behind her disarmingly easy-going demeanour, a razor-sharp wit backed up by requisite intellect.  Few political opponents made the mistake of underestimating her a second time.

Jan stood as the Labour Party candidate for Sutton Coldfield at the General Election in 1992. She polled a creditable 15% of the vote, importantly keeping the sitting MP – a senior Cabinet Minister – campaigning in his safe seat rather than rallying the Tory troops in marginals and target seats elsewhere. 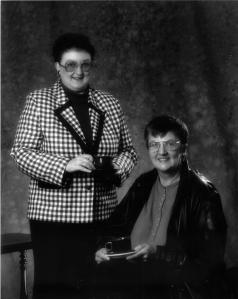 In May 1994 Jan was elected to serve as Councillor for Oscott ward on Birmingham City Council.  Councillor Keith Linnecor, the long-serving Oscott ward Councillor published a nice summary of Jan’s City Council service on his blog, please take a few moments to read it.

To me, Jan was both a relative and a comrade.  When I was little, she was my Auntie Jan – mother of my brilliant, tearaway cousin Marcus.  Sadly Marcus predeceased his mum, dying in 1987 – somewhat ironically – during the General Election campaign.  Jan was a great companion to the theatre, the ballet, the pantomime – even the cricket!  We went together as visitor-delegates to the European Parliament and I escorted her on Council duties on many occasions. 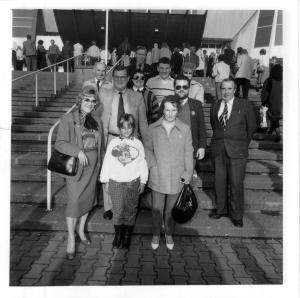 Jan (shades, striped top) grinning over the shoulder of John Tomlinson, then MEP for Birmingham West.  The other ‘shady’ character is Gogwit.

My memories of Jan will be of her laugh, her ‘Cheshire Cat’ grin, her love of life – food, words, song, politics – and of course, her hats!

Jan would find this final irony – that Baroness Thatcher‘s funeral would be held on the same day as her own – too delicious for words.

Since my initial post I have been made aware of the tribute to Jan made by the Full meeting of Birmingham City Council, 9 April 2013CE – please use the link to view and be aware that the Lord Mayor begins by informing the councillors of Jan’s passing at 15:00 minutes into the footage.  A motion noting Jan’s service and tributes from the Labour, Conservative and Liberal groups follow, along with a minute’s silence.

Jan was cremated on the afternoon of 17 April 2013CE, her ashes distributed over the beautiful gardens of the crematorium.  The chapel was filled to capacity by around 200 people representing all areas of Jan’s rich and varied life, gathered to give thanks for that life.