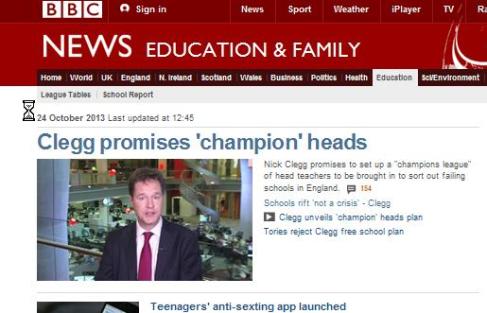 A majority Liberal Democrat government would enlist the services of the fictional ’60s Geneva-based Nemesis organisation to save the UK education system from total meltdown at the hands of the ruthless megalomaniac known only as ‘Pob’ (in under an hour including commercial breaks.)

Craig Sterling, Sharron Macready and Richard Barrett would be among the first wave of ‘Superhuman Heads’ to combat the evil forces of the shadowy Enemies of Promise, it is rumoured (or rumored in the US.)

Nemesis spokesperson Tremayne speculated; “The general plan would be to crash plane-loads of teachers in the Tibetan Himalayas and leave them to find their way home.  This seems to have done the trick for Craig, Sharron and Richard.”

Mr Clegg said; “I think that free schools should follow the national curriculum and employ qualified teachers” to his reflection in the bathroom mirror.